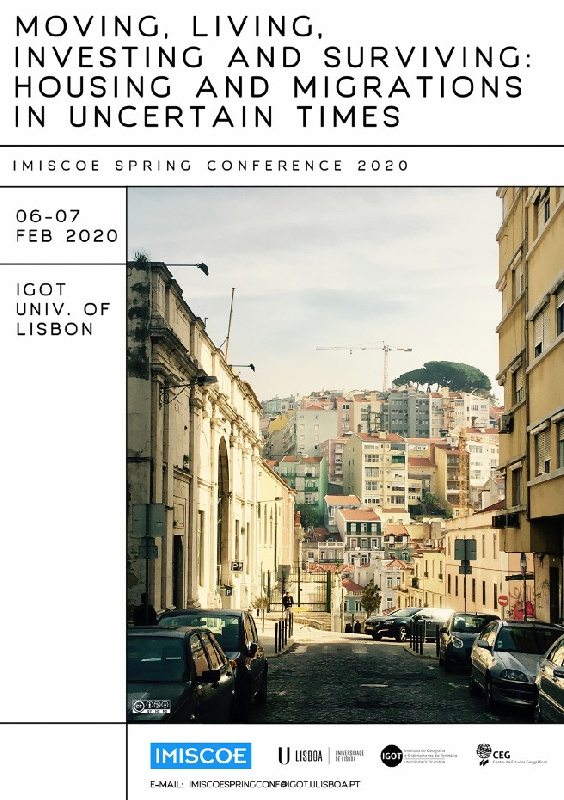 Housing represents a major dimension of immigrant settlement and immigrant integration. Since the earliest contact theories to today’s “politics of presence” (Darling, 2017), where people live and can live has been a central concern to public policymakers, academics, activists and crucially, newcomers themselves.

However, the question of whose responsibility it is to make sure that newcomers have the right to decent housing, and have this right respected, is rather uncertain. Lines between State, private sector and individuals are blurred: State-led housing programmes are being privatised and outsourced; homeownership is increasingly financialized; private sector investments are encouraged by the state through investing mechanisms; residency is for sale through real estate investments; and ultimately, in a neoliberal era, households are held responsible for securing a home, and therefore a safety net when welfare erodes.

Even though the issue is pressing, until recently, housing was relegated to an “out of fashion” matter after the building of the big ensembles of the 1960s and 1970s in Europe. The “local turn” (Scholten & Penninx, 2016), associated with urban citizenship and the sanctuary cities movement (de Graauw, 2014) provides a way of looking at the phenomena. The question of housing is not limited to its ‘where’ component, but unfolds into how migrants inhabit these spaces and the kinds of (urban) experience they allow to take place (Datta, 2008). Such transversal concerns cut across the ideas of ownership and the notion of housing as a commodity to also encompass housing as home, identity, well-being and access.

Additionally, the impacts of tourism, increasing international residential investment and lack of supply have resulted in housing crises in southern European cities (Allen, Barlow, Leal, Maloutas & Padovani, 2004), such as Lisbon and Barcelona, but also other parts of the world. Local, national and transnational social movements have denounced the high cost of housing relative to local incomes, precarity, overcrowding, the settlement of new populations in poorer neighborhoods and associated evictions, and changes in housing patterns. In this context, migration plays a complex role inasmuch as migrants may be among the most vulnerable populations and thus risk eviction, but could also be triggering gentrification and real estate speculation processes, in the case of privileged and investment migration.

In fact, the material aspect of the migration-housing relationship assumes a range of shapes, from refugee camps, precarious squatting conditions, self-built and informal housing, and overcrowded shared accommodation to luxurious high-end real estate properties, second homes, and uninhabited flats awaiting an increase in market price. Each of these forms of migrant housing entail specific forms of sociability, habitation, and relationships with their (urban) surroundings.

In this context, the objective of this IMISCOE spring conference is to address the links between housing and migrations, whether material or immaterial, for different populations (privileged migrants, refugees, native residents, etc. across different settings (whether urban, peri-urban and rural) and that in origin and receiving regions.

Papers relating to the following issues (but not limited to them) are welcome:

The IMISCOE spring conference will be held on 6-7 February 2020 at the Institute of Geography and Spatial Planning, University of Lisbon (see location here).

To address the various topics mentioned above, two keynote speakers have confirmed their participation at the Spring conference:
Jonathan Darling is an Assistant Professor in Geography at the University of Durham and has been working on the issue of housing in refugee settlement in the UK;
Thomas Maloutas is a Professor of Social Geography at Harokopio University and has been focusing on housing and welfare policies in Southern Europe.

The organisers encourage the submission of papers that could be gathered for a handbook on the issue of housing and migrations. To this end, parallel sessions will be organised along themes that can later become the sections included in the volume.

We invite proposals for presentations addressing the themes addressed in this call. Authors can submit a short abstract (250 words) and a biographical note at This email address is being protected from spambots. You need JavaScript enabled to view it. until 30 September 2019.
We strongly encourage authors to highlight the way their research relates to the overall theme of the conference; and the contribution of their work.

Results of the selection will be communicated to all authors at the end of October 2019.

Information around the spring conference (meetings location, accomodation and info).

We are very happy to invite you to GenSeM's first online symposium. Over two days, we will discuss the gendered nature of social boundaries, ways individuals of migrant backgrounds have challenged them, and how art can become a way to express belonging...

Webinar: Rotterdam - A Case Study of a Superdiverse Post-Industrial City

With this webinar - the second in a series of UNIC Seminars - hosted by Erasmus University Rotterdam, we will delve into the topic of Superdiverse Post-Industrial Cities. The webinar will feature Prof. Paul van de Laar and will focus on the city of...

CfP: Workshop on Ethics and Privacy of Big Data Use for Migration Research

We invite contributions for the joint online workshop "Ethics of Big Data for Migration Research" organised by the HumMingBird consortium (Enhanced Migration Measures from a Multidimensional Perspective, H2020 project - GA 870661), the SoBigData++...

The observation that ‘[b]elonging like home entails personally significant and emotional connections between people and places’ (Kusenbach & Paulsen 2013, p. 6) continues to take on novel forms and high political and existential stakes. Irreducible to...

Family Migration in Times of Crisis

Description The ‘Family Migration in Times of Crisis’ workshop will explore the impacts of crisis on family migration, how family migrants respond to crises, and intertwined temporalities of crisis and migration. The crises to be considered include,...