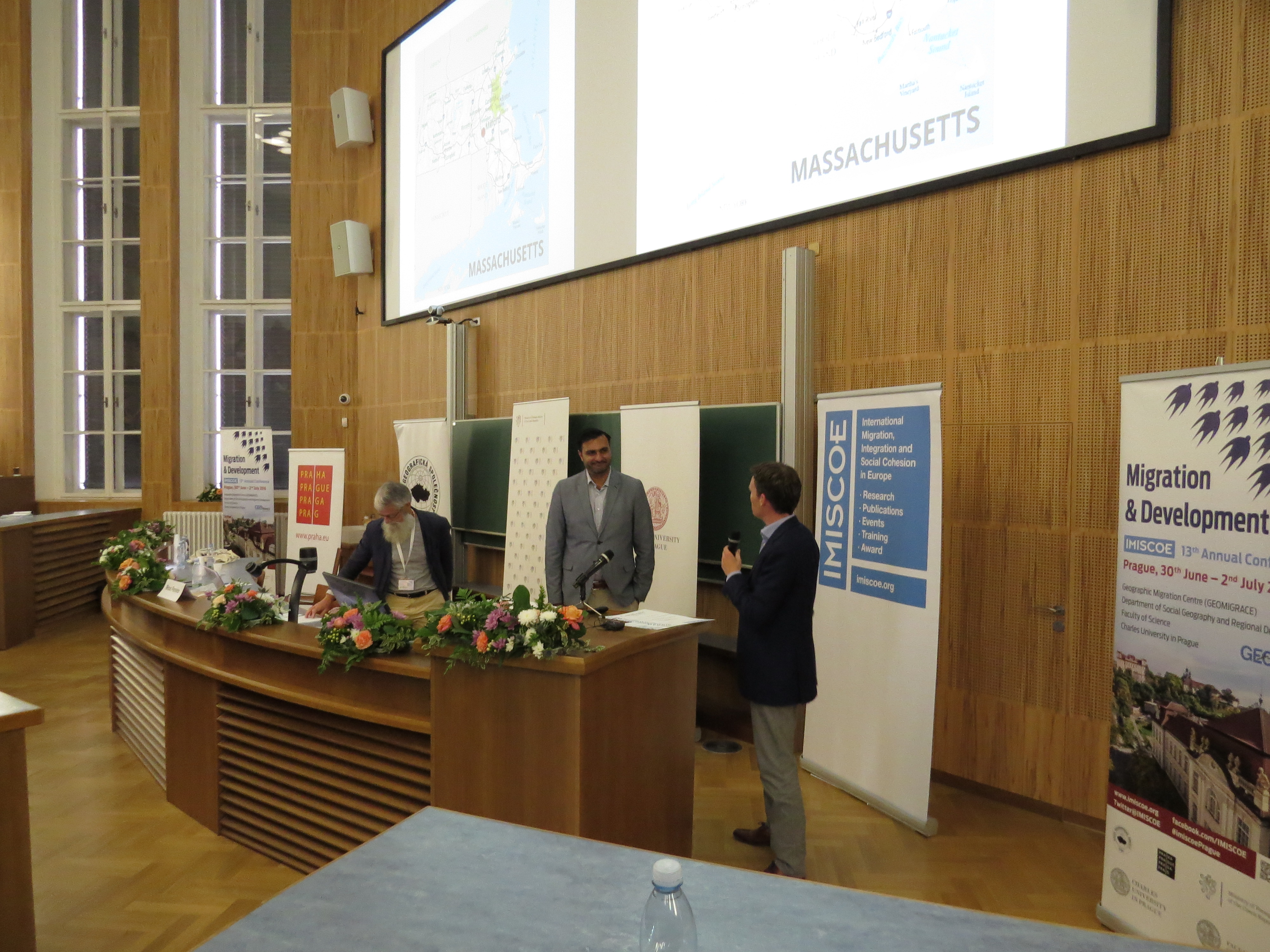 The Rinus Penninx Best Paper Award was awarded to Ali Chaudhary at the 13th Annual IMISCOE Conference, held in Prague on 30 June-2 July 2016 for his paper entitled:  'Voting "Here" and "There": Interrogating Immigrant Political Integration and Transnational Political Remittances'.

'Voting "Here" and "There": Interrogating Immigrant Political Integration and Transnational Political Remittances' explores why some migrants vote in their countries of destination while others vote in the elections of their origin countries.

The award is presented in honour of the founding father of IMISCOE, is an annual award for the best paper submitted to and presented at the IMISCOE annual conference, and sponsored by Comparative Migration Studies. This is the second time the award has been given to a paper from IMI: in 2014 the inaugural prize was awarded to Marie-Laurence Flahaux and Hein de Haas.
A version of the winning paper is published as an IMI working paper.
Read more about Ali's current research on the TRANSMIC project, which seeks to contribute to the understanding of the concept of transnational migration.

Ali Chaudhary is assistant professor in the Department of Sociology at Rutgers University in New Brunswick, New Jersey. His research interests lie at the intersection of international migration, political sociology, and organization studies.

He writes and teaches about nonprofit organizations, immigrant politics, and ethnic entrepreneurship. I've published research on immigrants' transnational electoral politics in Europe, Pakistani immigrant nonprofits, and the intersection of race and immigration within U.S. self-employment.

Every year, IMISCOE organises a summer- or winterschool for PhD's in the field of migration, integration and social cohesion studies. These PhD schools involve training in relevant theoretical frameworks in these fields, but also methodological training and specific modules aimed at publication and PhD strategies.

The late Maria Ioannis Baganha was a leading migration scholar at the Centre for Social Studies (CES) at the University of Coimbra. She was one of IMISCOE’s founding members and Chair of the Board of Directors until she passed away in June 2009. To commemorate her work in the field of migration studies and particularly for the network, the IMISCOE Board of Directors has dedicated the IMISCOE Dissertation Award to her. This annual prize is awarded to the best IMISCOE dissertation in the field of migration, integration and social cohesion in Europe.

The IMISCOE - Rinus Penninx Best Paper Award, in honour of the founding father of IMISCOE, is an annual award for the best paper submitted to and presented at the IMISCOE conference. An anonymous review committee decides on the allocation of the award. Besides the honour of receiving the award, the prize winner also receives €750,-- and the opportunity to publish the paper in the journal Comparative Migration Studies.

EuMIGS is a network of Master Programmes in Migration Studies in seven European countries. It offers master students the opportunity to spend up to one year at another programme in another country.