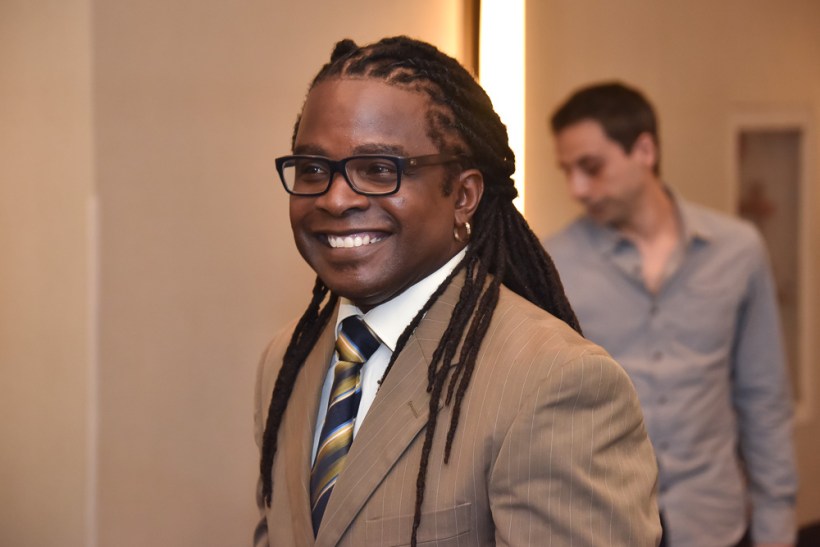 Dr. Francio Guadeloupe, one of this year’s panellists for IMISCOE’s 18th Annual Conference, is a social and cultural anthropologist who has been a tenured staff member at the Department of Anthropology at the University of Amsterdam since 2013.

Additionally, Dr. Guadeloupe is a senior research fellow at the Royal Netherlands Institute for Southeast Asian and Caribbean Studies. His research focuses on how popular understandings of national belonging, cultural diversity, religious identity, and mass media constructions of truth, continue to be impacted by colonial racisms and global capital.

Firstly, what would you like to tell the IMISCOE community about yourself?

Let me start by what I do, because I think it’s vital that we start with the deeds of a person. I work as an Anthropologist, that is my professional job. I work at the University of Amsterdam, where I have worked for many years. I am a senior researcher at the Royal Netherlands Institute of Southeast Asian and Caribbean Studies. I look at society through the lens of popular culture, because growing up, that was my culture. It was not a national or ethnic culture, but it was popular culture. That was what mattered the most to me and what was formative for me, and I learned a lot from it. There is a way of knowing in popular culture. By that I mean primarily Black Atlantic popular culture or what is sometimes called urban popular culture. The culture that emerged that does not belong to a nation, that is transnational and is the coming together of peoples exchange of cultural ideas. In my anthropology, I at times mention that humans are not simply creatures that talk, but also creatures that dance.

Your research delves deep into colonial racisms and their impacts on sense of belonging, and ethnic and religious diversity—especially in relation to the Dutch Caribbean. What sparked your interest in pursuing this research? What motivated you to pursue research in this region and specific colonial relationship?

I began my life in Aruba, then I moved about and wound up on St. Martin. My research on the Dutch Caribbean came later. I had two books out on Brazil and was trained to work on India to look at cricket to understand the role of the Commonwealth and how the spirit of the Commonwealth has remained in India. Then I moved to Brazil and studied the Candomblé and Umbanda. I was working for a large NGO when I was contacted for a vacancy due to my work on Brazil. I understood the work to be about the politics of belonging and its transformations following the end of the Cold War. There was an erroneous belief that people would fight as ethnic and religious differences would rise again. To an extent, this could be true, but it should not be the sole factor. This piqued my interest in studying the question of belonging in St. Martin due to its enormous amount of ethnic and religious diversity.

Later, I expanded and looked at Saba, St. Eustatius, Curaçao and Aruba. This made me realize that the Caribbean was one of the first places where early forms of globalization took place. People moved from across the globe, whether voluntarily or not. The Caribbean was a space where people had to learn to recognize and engage in difference. Difference became a fact of life. This became a region where somebody always emerged or came from somewhere else, where religious and cultural differences were always present. It was all just part of the mix. It was there, so it belonged there. I think that places in western Europe are now experiencing this. They will now have to recognize that it is going to be tense. Sometimes you will have moments of harmony and sometimes moments of strife. But after a while, which you already see traces of that, people will just have to be accustomed with the fact that you cannot say ‘this is the face of a Dutch person’ because the face of a Dutch person is all the various faces of people.

Especially in the times we find ourselves in, with the massive movement of Black Lives Matter (BLM), the rise in Anti-Asian racism and the COVID-19 pandemic highlighting continuous racial inequalities around the world. How do you think fellow scholars could benefit from your research and perspective on these topics?

These are powerful moments. The movement of BLM is a powerful moment, a plural moment. It signifies many different things. The assassinations and people going on the streets the US, protesting for George Floyd, protesting the legacy of American racism, the fact that the middle-class is suffering and so forth. But I think BLM in the European context, is a question of recognition. This is the struggle. If your grandmother came to the Netherlands, your parents were born here, you are born here; for you to be called a migrant and being deemed as a ‘non-belonger’ is a strange thing. This is the signification behind the movement - the fact that people do not feel completely recognized. The fact that these people are standing up and went to the streets, the fact that it was a polyethnic ensemble says something. The youth across western Europe are those pushing for an inclusive and polyethnic belonging.

So, we really need to distinguish what BLM means. We also need to recognize that the ideology of racism has been defeated. No one overtly says “of course I am a racist” anymore – or I guess only a few crackpots. What we now need to do is sweep up the floor as the floor is still dirty. After the war, people in Europe had to reinvent themselves and who was there? Sam & Dave, the Notting Hill Carnival, a particular kind of way of carrying your body when you’re playing football – that’s Pelé and all these other figures. That is what has been transformed. Nowadays, you have the younger set of urban popular culture artists in the Netherlands and elsewhere doing the same. There will be neighborhoods in the Netherlands with no new ethnic diversities who are listening to these artists, trying to act it out and watching these videos. So, these same people will also stand on the streets when things go wrong. They will stand next to the kids who grew up in more diverse neighborhoods.

Where do you think scholars in the field of migration and diversity should go from here?

I think there are certain topics that need to be connected. One important issue is how we are going to live together with the multiplicity of differences. That is an important thematic that I think much of migration studies deals with and I believe this thematic needs to be tied to climate challenges. Diversity is seen as a strength, but I think we need to ask the question of how this strength can be combined with climate challenges. I think three major questions need to be asked: How are we dealing with difference, which IMISCOE is already dealing with, the question of the digital revolution, and the question of the Anthropocene. These need to start speaking to each other more, which I have been dealing with in my own work. They are signalling changes.

How would you like to see your research evolve in the following years?

I just got awarded a big grant, €3.5 million, to study climate challenges in the Dutch Caribbean. I will be heading a multidisciplinary group to study climate change on the six Dutch Caribbean islands. We will be doing it from various perspectives to try to understand the ways of knowing that people have on these islands. We will also have technical staff to be part of the research and archaeologists to understand the longer trajectory of our research. We go beyond the idea of precolonial and post-colonial. So, recognizing that and thinking that hurricanes are emerging more and more. Places like Aruba, Bonaire and Curaçao would be flattened if they should ever experience a category 1 hurricane. But these islands will begin to experience these types of climatical forces. We need to take the differences between the islands and tie these to the question of technology. So once again, the multiplicity of differences. These are the things we will look at in this project and hopefully a Transatlantic Academic Platform can be put in place in the next five years to connect universities from the Netherlands, Dutch Caribbean, and the wider Caribbean with each other. As such, staff and expertise can be exchanged to build up the infrastructure on these islands. Hopefully by the end of the six years, we can have a regional expertise centre manned by a set of PhDs who then conduct fundamental research on the islands and integrate the Dutch kingdom.

What are you currently working on that you’d like to share with the IMISCOE community and what is currently on the horizon for you?

As far as writing is concerned, I have a book coming out called ‘Black man in the Netherlands. An Afro-Antillean anthropology’ which tries to understand how the Netherlands is changing and being transformed by people of Caribbean descent. I look at the arts of belonging – popular culture - and how it translates itself sometimes to one version of the politics of belonging which is the politics of fulfilment. Since you claim these liberal rights, I want these liberal rights now too. If my rights say I can go on the streets to protest and the police will protect me, then I want these rights too. But the arts of belonging also enables politics of transfiguration in which people slowly change and transform.

I also have a second book coming out called ‘Equilibrity: Ways of being non-sovereign in the Caribbean’, which looks at six Caribbean islands and trying to understand their versions of communing and being together. Their lack of political independence should not signify that they lack something. This book tries to understand what notions of liberty and equity happened. This is an edited volume with Yvon van der Pijl of Utrecht University and a set of young Caribbean scholars who studied the Caribbean to rethink what exactly is the Dutch Caribbean and what Dutch Caribbean scholarship enables and intends.

PRIO invites applications for this course, which will be taught in person in Oslo in September 2022. The application deadline is 10 June. ​This new PhD-level course provides broad training on survey research methods, with an emphasis on applications in...
IMISCOE Network Office

At Fulda University of Applied Sciences, approximately 10,000 students are enrolled in over 60 Bachelor's and Master's degree programmes. More than 160 professors teach and carry out research in the eight departments. In terms of research, Fulda...