The history of the PhD Network 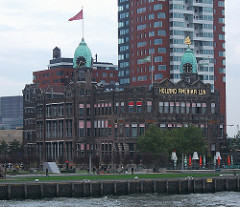 When IMISCOE was landed in Rotterdam in 2013 and the official launch was presented at Hotel New York in Rotterdam, some PhDs asked themselves: why isn’t there a PhD network? This question resulted in a small workshop in the IMISCOE conference in Madrid in 2014. Many scholars attended and the initial urgency of creating a PhD Network was widely shared. It evolved into new proposals in Florence, and finally a launch of the PhD Network at the Geneva conference in 2015.

The PhDs who were involved in this process shared the experience that they worked on their own, but that they did not work isolated from each other. PhD scholars share professional, ethical and personal concerns about research, teaching, and future careers. Therefore, collaboration within the broad, diverse and lively PhD community in IMSICOE had a huge potential. From the start, the creation of a PhD Network was largely stimulated by senior members of the IMISCOE network while PhD scholars were actively engaged in the creation process. The seniors made space for the juniors to create and develop an organisation that they, as a PhD community, thought would be useful for future doctoral researchers in the field of migration.

The current activities of the PhD Network stems from that initial urge of a few PhDs at Hotel New York, in Rotterdam 2013. Hotel New York, which originally was the point of departure for thousands of migrants going from Europe to the United States, thus became the point of departure for the PhD Network - the community for PhDs in the field of migration.

After a great first round of PhD Peer Feedback Sessions on Reflexivities in Migration Studies during the spring semester, we are now launching a second call to continue the sessions into the winter semester! The sessions are organized by PhD members of...

The Standing Committee on Migrant Transnationalism (MITRA) provides an arena within IMISCOE for exchange on migrant transnationalism. In this spirit, we are happy to announce MigranTea – informal sessions for PhDs candidates, working on the field of...

Yet again, the 2021 IMISCOE Conference was not only a unique opportunity to engage with innovative research in Migration Studies but it also offered PhD candidates in the field the opportunity to cross disciplinary boundaries and connect with each other...

Initially, I was not planning on going to the PhD network activities of the IMISCOE spring conference, which took place in March 2021. Since at that point my life had been consumed by setting up an experiment survey, it really felt like every moment not...

The PhD Network is happy to share the program of the PhD activities scheduled on July 7th, as per tradition, during the first day of the IMISCOE Annual Conference 2021. We are proud to announce that PhD activities are free and open to all doctoral...