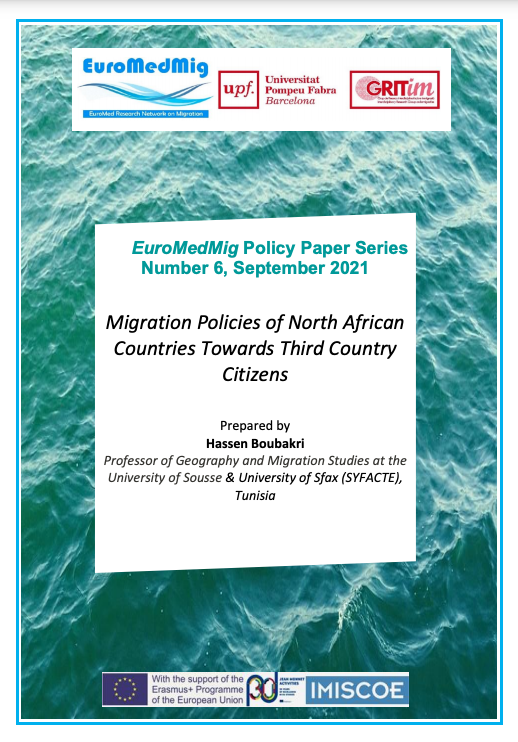 On behalf of Ricard Zapata-Barrero, from the EuroMedMig network and GRITIM-UPF, we are pleased to announce that the last number of the EuroMedMig Policy Paper series entitled "Migration Policies of North African Countries Towards Third Country Citizens" by Hassen Boubakri (University of Sousse, University of Sfax) has just been released.

This Policy Paper summarizes the Tunisia National workshop held online on 11 November 2020. The purpose of this workshop was to analyze the migration policies applied by North African third countries to nationals of other third countries in the region, and in their southern neighbourhood, (i.e., nationals of Africa South of the Sahara). The objective is to understand the underlying logic of these policies and to understand how they coincide, or not, with those of European migration policies towards third country nationals in general and those of North African countries in particular.

Why did we choose to make this segment of migration policies, as a general frame of reference, a subject of analysis and debate during this workshop? Generally, analysts deal with dominant migration policies and consider that "dominated" third countries are subject to these policies. This seminar allowed us to decentralize our view of these policies; since in the South too third-country nationals are subject to the logic of migration policies implemented by other third countries. We wanted to shift the focus from the vertical North-South scale (relations between the North (the Center) and the South (the periphery)) to a horizontal, South-South scale, i.e. within the group of so-called "Third Countries" in the EU's southern neighbourhood. The aim is to demonstrate that North African third countries have their own Southern neighbourhood, which is essentially Sub-Saharan Africa.

The course provides a deeper understanding of theories and concepts related to the causes and consequences of international migration in the research field of International Migration and Ethnic Relations (IMER) from a multidisciplinary perspective. The...

The NorITS (Northern Institute of Taiwan Studies) team at UCLan has started a new project, named Taiwan on Air 空中直播台灣, a podcast series on Taiwan. The first episode is out now, with more episodes to come! Series introduction What is Taiwan for the world...
Mathias Czaika

Call for Papers and Panels: 7th Biennial Conference on Migration Research in Austria

By 2050, two-thirds of the world’s population will live in cities, and migration will be a significant driver of urban growth. But what will the future city be like: a hub of creativity and inclusion or a place of disparity and exclusion for many? Join...
ISMU

The SprINg platform is growing: join a transnational community of stakeholders working on integration policies and practices

The EU-funded Sustainable Practices of INtegration (SPRING) project has launched a campaign to involve stakeholders under the SprINg transnational stakeholder platform.