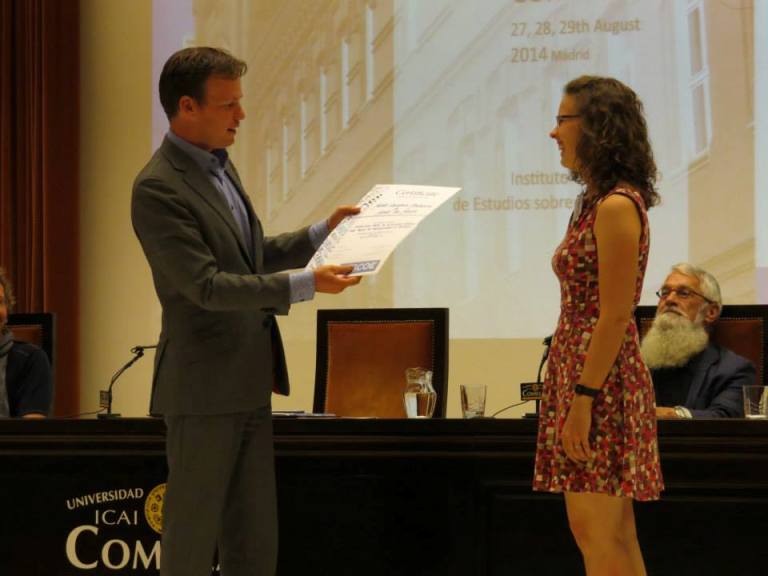 At the end of the 11th Annual IMISCOE Conference, held in Madrid at the Universidad Pontificia Comillas on August 27-29, 2014, the IMISCOE – Rinus Penninx Best Paper Award was awarded for the first time. In total 21 papers were nominated for the prize by the organisers of the workshops of the conference. A jury of nine members, chaired by Rinus Penninx, first made a shortlist of nine papers that received the highest scores of the jury. These nine short-listed papers have been read and evaluated by all nine members of the jury and the best paper of Marie-Laurence Flahaux and Hein de Haas was chosen unanimously as the best paper. Marie-Laurence Flahaux received the check of 750,- euros, and a waiver for publishing their paper in the journal CMS, during the closing session of the conference from Rinus Penninx with these words:

“This paper is chosen because of its broad and ambitious approach to migration in the continent of Africa. It is theoretically informed in its approach and technically interesting in its use of new sources. It is consistent in its structure and it leads to conclusions that often do not coincide with the general images of African migration in the media and sometimes are even counterintuitive scientifically.”

The jury mentioned two to other papers as near best papers:

As second best paper was chosen the one of Philipp Schnell and Rosita Fibbi: “Getting ahead. Educational and occupational trajectories of the `new’ second-generation in Switzerland”. The jury said about this paper:

“The paper analyses the educational and labour market careers of second-generation Turkish and Western Balkan origin in Switzerland as compared to their Swiss age mates: is there social mobility? For whom? At what stage? Through what procedures? Second generation immigrants do have serious disadvantages in the beginning of the educational system, but a large part of these youngsters catch up in the course of their education and labour market careers, motivated by their family background. Particularly this last conclusion is one that runs counter to the general image of the second generation.”

As third best paper was chosen the one of Agnieszka Radziwinowicz: “Li(ea)ving The Deportation Regime: The Mexican Experience of Foprced Reverse Migration”.  The jury said about this paper:

“Thus paper is on deported Mexican migrants from the US, on how such deportations are experience4d and how such experiences should be interpreted. The paper confronts ideas and assumptions from political philosophy with ethnographic and narrative data of deported persons. As the author herself explains, the paper itself is work in progress; the jury wants to encourage the author by given her this third best place.”