A series of talks with different figures from and around IMISCOE.

We are now celebrating 15 years of history of IMISCOE. In order to do so we wanted to engage with some of the individuals who are an integral part of IMISCOE and go beyond the surface level that we often stop at. This is only the first chat and it is part of a larger series of interviews with some of the highest personalities in and around the IMISCOE network. We’ll take a walk down memory lane and have a look to what the future holds for the IMISCOE world. 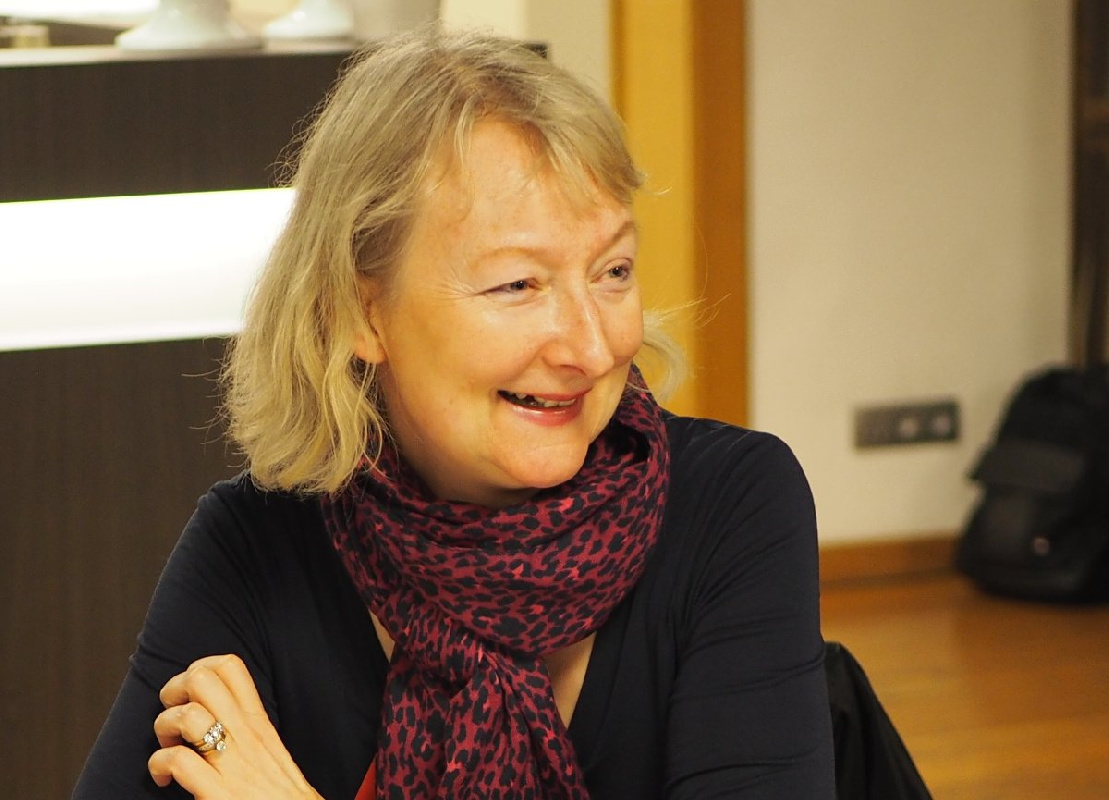 Our first guest is Louise Ryan is Professor of Sociology at the University of Sheffield and co-director of the Migration Research Group. She researches migration through a qualitative lens including longitudinal methods and is a pioneer in the use of qualitative social network analysis. She has published extensively, over 20 years, on intra-EU mobility, gender, religion, ethnicity as well as social networks. She is currently researching aging and migration.

I first became aware of IMISCOE many years ago when I was working at the Social Policy Research Centre, Middlesex University in London. The IMISCOE annual conference was once described to me as ‘speed dating’ for migration researchers. So, I was very excited and somewhat curious to attend my first IMISCOE conference. Indeed the promised ‘speed dating’ definitely proved to be a reality. I was delighted to see so many of the leading migration scholars at the conference and to have the chance to talk to them informally over coffee. I also met many former colleagues and acquaintances whom I had not seen for years. So, for me, my first IMISCOE conference was a mix of a lovely ‘reunion’ and an exciting ‘speed dating’ opportunity.

My research, over the last 20 years or so, has focused largely on intra-EU mobilities. I have researched European migrants mainly in London. My work has included recently arrived migrants from post-2004 Enlargement, especially Poland, but also from older EU member states including France. While Poles are very extensively researched in the UK, there has been far less attention on migrants from old EU countries such as France. My work on Irish migrants to London takes places at the nexus of intra-EU mobility and former colonial migration histories. Joining IMISCOE has been very important to me and provided access to a great community of migration scholars. It has given me the opportunity to share insights and findings with other like-minded researchers. I have learned so much from meeting and talking to other members of IMISCOE.

Through IMISCOE, I have been able to forge new networks with scholars from across Europe and beyond. I have joined several standing committees and I have greatly benefitted from the chance to share my work and gain insightful feedback. Moreover, through these social connections, I have been invited to participate in other events, workshops and conferences, to contribute to book proposals and journal special issues. So, these connections have proved to be extremely fruitful.

When I moved to the University of Sheffield in 2016, I was delighted to find out that the Migration Research Group was an institutional member of IMISCOE. Along with my colleague Dr Majella Kilkey, I became an IMISCOE director and had the opportunity to attend annual meetings of the board. This has given me valuable insight into the work that goes on beyond the scenes of the organisation and increased my appreciation of the commitment and dedication shown by the organisational team.

In recent years, across Europe, we are witnessing a worrying shift to the right and indeed an increase in far-right activism. Attitudes and rhetoric that had been pushed to the margins of political debate, in many countries, have now re-entered mainstream politics. This is also clearly apparent in the UK in the wake of the Brexit referendum which has opened the ‘Pandora’s Box’ on xenophobia, racism and hatred. Not only refugees and visible ‘outsiders’ but also European migrants in the UK have been subjected to abuse. I have been researching this issue since 2016 as EU migrants in the UK experience an unexpected shift in their positionality post-Brexit referendum.

Within this context, it behoves all migration researchers to take seriously the growing politicisation of migration and the worrying shift to the right in European political discourses. As researchers who understand the complexity and heterogeneity of migration, as well as the essential humanity of migrants themselves, we have a moral responsibility to challenge misinformation and racism in all its forms.

An additional challenge is global climate change and its consequences for migration flows. We are already seeing, in parts of Africa, for example, climate refugees attempting to move across borders in search of water for themselves and their animals. The reactions of many African states in refusing entry to these desperate people is just a foretaste of what is to come across the globe as access to precious resources like water becomes the basis of new migratory movements. This is the coming reality and we as migration scholars need to be ready to engage with and inform critical debates and policies.

Alongside my colleagues at University of Sheffield, especially Dr Majella Kilkey, I am working on a large study, funded by the Economic and Social Research Council, on ageing and care. Our work package focuses especially on ageing migrants. Much of the attention in migration research tends to be on younger migrants. In relation to ageing migrants there is growing interest in topics such as return migration and indeed retirement migration. But our study focuses on migrants who remain in the destination society into old age. The average age of our participants is 81 years and some are even aged in their early 90s. They originate from Ireland, Poland and the Caribbean and mostly arrived in the UK in the 1950s. Their experiences of ageing ‘in place’ raises questions about well-being, care and support but also about identity, belonging, citizenship rights and transnational networks. Our in-depth interviews and mobile methods are producing rich narratives which we are currently analysing.

There are so many great memories, especially of conferences in wonderful locations. It has been a great privilege to visit such beautiful cities and meet so many interesting people. But I am especially proud of the IMISCOE sponsored conference we hosted at the University of Sheffield in March 2019. It was supposed to be ‘Brexit day’ (29th March) and we were keen to embrace our European networks at that precise moment of departure. Luckily, in the end that did not prove to be Brexit day – indeed another ‘Brexit day’ (31st October) has since also come and gone by without our departure from the Union. The Sheffield/ IMISCOE conference was a great success and reassured us that despite Brexit, our established working relationships and friendships with European colleagues will remain strong.

Fifteen years in, and being someone who’s deeply engaged with this environment, where do you hope to see IMISCOE go in the next fifteen years?”

As I have mentioned above, there are big challenges facing us, not least the shift to right-wing politics with its virulent anti-immigration rhetoric and the global threat of climate change and its consequences for massive population displacement. IMISCOE has a vital role to play as a platform for robust migration scholarship working to find solutions to global challenges and tackling misinformation about immigration. But migration is not just a European issue. I recently visited West Africa and spoke to migration researchers there about the challenges they are witnessing, in relation to climate change refugees but also massive internal migration from rural to urban areas. In order to address the challenges, but also the opportunities, underpinning migration, we need to see the bigger picture and work with colleagues from the Global South. Thus I would like to see IMISCOE work increasingly with researchers across Africa.

Editorial
IMISCOE 2.0
The new IMISCOE website and the IMISCOE Bulletin will provide a new online presence of our research network. However,...
News
Save the date IMISCOE is going online!
We are thrilled to announce that Europe’s largest network in the area of migration and integration will take...
A chat with
Louise Ryan
We are now celebrating 15 years of history of IMISCOE. In order to do so we wanted to engage with some of...
News
The 2020 IMISCOE Conference in Luxembourg is moved to 2021
Unfortunately, the COVID19 crisis has had implications for the organization of our 2020 annual conference....
Spotlight
CrossMigration and the Migration Research Hub
The Horizon 2020 project, CrossMigration, led by IMISCOE, has been running since March 2018 and will come to an...
Vitrine
Vitrine
The “Vitrine” is a section that will wrap up every Bulletin issue moving forward. This is a space dedicated...
News
Call for Seed Funding Research Initiatives CANCELLED for 2020
IMISCOE encourages scholars from the network to explore new opportunities for research, collaboration and...
Welcome to the IMISCOE Bulletin
IMISCOE celebrates now 15 years of its history and amongst the many goals we’ve constantly strived for,...
Colophon
Meet the team
Editorial Committee: Erasmus University Rotterdam Coordination: Ricard Zapata-Barrero, GRITIM-UPF, Barcelona...