This month we had the pleasure of talking to Dr Lucy Mayblin, Senior Lecturer in Sociology at the University of Sheffield about her new book ‘Impoverishment and Asylum: Social Policy as Slow Violence’ and the importance of history in contemporary migration research. Grab a coffee and enjoy this one-off long read.

Congratulations on your new book Impoverishment and Asylum: Social Policy as Slow Violence which was published in December 2019 with Routledge. Can you give a short summary of the book and describe what motivated you to write it?

This book is based on the research that I have been doing since 2015 on a project funded by the ESRC Future Research Leaders scheme. The project was originally all about the economic rights -welfare rights, and working rights- of people who have sought asylum in the UK. So in part it is about exploring the purposeful impoverishment, by a particular state, of people who have sought asylum. But as with most projects it also isn’t just a stand alone programme of research, it links into my previous book Asylum After Empire, which explained the curtailment of the right to asylum in the early 2000s within the context of colonial histories. In Asylum After Empire I was interested in what has come to be understood as the ‘non-entre regime’ and why it emerged. Somehow most scholars (at the time I was doing the research) were explaining non-entre regimes without mentioning colonialism or race. So the policies would be explained in terms of the numbers of asylum applications received in Western countries being unprecedented, and the character of those who were applying being completely different to those in the past. The shift from white European (Soviet) refugees to black and brown refugees arriving from former colonies appeared to have led to a massive moral panic, and a limiting of the right to asylum. I was interested in elucidating how this was not a break with the past but a continuation of colonial logics. In this new book, Impoverishment and Asylum, I explore a specific implication, and aspect of the non-entre regime. That is, the way in which people seeking asylum are now widely thought of not as refugees but as economic migrants who are subject to economic ‘pull factors’. The policies which have then been pursued to limit such pull factors and deter economic migrants from abusing asylum systems have wide ranging, and devastating impacts on people who have sought asylum, and on the charities and people that support and advocate on their behalf. This book focuses on this and explores it from a variety of perspectives, but it is still rooted in a commitment to understanding the present within the context of colonial pasts.

It is easy to use the phrase ‘asylum seekers’ because it is quick and easy and captures a population of interest easily in the context of a written publication where you might be referring to a particular group of people hundreds of times. I have always felt uneasy about this because, of course, ‘asylum seeker’ is just a legal and administrative category, and the people who fall within that category do not necessarily have anything at all in common aside from the fact that they all have made an application for asylum. But at the same time, I have always been conscious of the fact that the legal immigration or citizenship category that one falls into can be a matter of life and death and the administrative distinctions are extremely important in terms of people’s ability to live their life in dignity and freedom. And with this in mind I have chosen in the past to go with the label ‘asylum seeker’ in my writing. But while writing this book I was at a meeting where a group of people who would fall into the administrative category ‘refugee’ were discussing how much they hated that label, how ashamed and, literally, labelled it made them feel. And many of the participants in this project, who had all made an application for asylum themselves, also spoke of ‘asylum seeker’ and ‘refugee’ as being like dark and degrading secrets that they did not want others to ‘find out’ were attached to them. Listening to these important insights and maybe properly hearing them for the first time, convinced me to stop being lazy for the ease and fluidity of writing, but to be much clearer in how I describe people. We are all people first and foremost and then we are people who have done things, including important and significant things such as making an application for asylum in a foreign country. So in this book, and henceforth, I chose to make the slightly clunky but nevertheless more accurate description, for example ‘people who have made an application for asylum’. 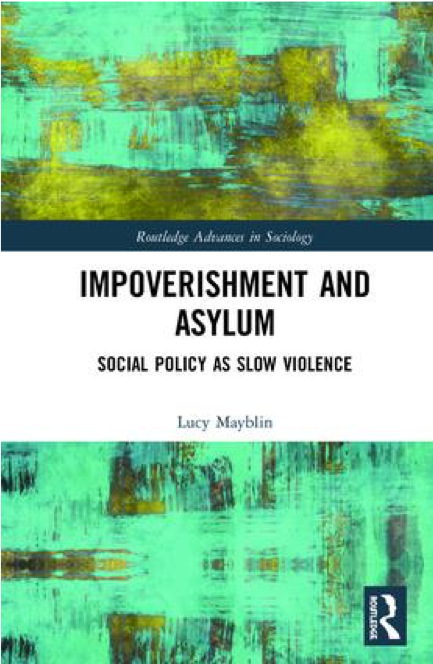 A key concept in your book is that of poverty as a form of ‘slow violence’ which is enabled through state structures. Can you describe the concept and its relevance in our current political climate surrounding migration?

I conceptualise the degradation of life under the particular regime of impoverishment that I am observing in the UK asylum system as necropolitical slow violence. By using slow violence I am drawing attention to the fact that violence has a temporal aspect. I think this is important in understanding state violences against some people who cross borders and that impoverishment is connected to more visible acts of border control on a continuum of violence. So border violence can be fast and dramatic, or slow and dispersed, and my interest here is in the slow end of the spectrum. I thought I had come up with this awesome new concept but I quickly discovered that in fact Rob Nixon beat me to it by eight years, and his work offered a lot of inspiration to me. He has written on slow violence as a way of thinking about natural environments which have been damaged in ways which bring delayed harms to humans and other species. Though this is a really different empirical context, there are so many overlaps between his case and mine. He is interested in how the violent effects of some phenomena become decoupled from their causes because of the passage of time, and how some violent phenomena consequently produce belated casualties. The violence of asylum regimes can be slow, but it can also give rise to moments of sudden violence, such as deportations. In the case of those on the receiving end of economic restrictions, it is the slowly unfolding everyday violence of enforced poverty which characterises the phenomenon. Slow violence is characterised by forgetability, ignorability, invisibility. The slow degradation of the bodies and minds of people who are awaiting a decision on their application for asylum, through impoverishment, means that like other examples of poverty, their suffering is individualised and diffused; it happens quietly behind closed doors, making it largely invisible to the majority of the population. We might contrast this with highly visible refugee crises which can have a dramatic, even violent, immediacy, which is harder to ignore.

In your book, you argue for an approach that moves beyond a-historicism in migration research. How has this emphasis on migration and colonial history informed the book?

This book, like Asylum After Empire, is very much inspired by work in postcolonialism, decoloniality and third world approaches to international law. I drew particularly on Robbie Shilliam’s work on Race and the Undeserving Poor, and Achille Mbembe’s work on Necropolitics, as well as Rob Nixon’s work on Slow Violence, but also more broadly from a wealth of inspiring work which explores the enduring relevance of colonialism in the present. It is very difficult to contemplate the politics of asylum without acknowledging histories of colonial categorisation, dehumanisation, immobilisation and racialisation and so that is always present in my work.

Why do you think there seems to be a reluctance which remains within contemporary migration research to engage with migration histories? What are the dangers of neglecting the history of migration in contemporary research?

I think that something is starting to shift in migration research but migration studies, and refugee and forced migration studies in the ‘West’ or ‘Global North’, have been especially resistant within the social sciences to engaging with history. I think this is because international migration is complex and dynamic, it is always changing, and the stakes are high. Particularly in the case of forced migration, every year brings new migrations and crises, and so to engage with history can feel like you are taking your eye off the ball. Of course there do need to be researchers who are offering new data on new phenomena, but the risk is also that if we all do that and have very little historical awareness then everything can feel unprecedented when in fact it probably isn’t. There is a real value in gathering the contemporary data but then offering an analysis of it that is grounded in deep engagement with history. This, for me, is what scholarship is all about. Aurora Vergara-Figueroa offers a masterclass in this in her book Afrodescendant Resistance to Deracination in Colombia, which everyone must read! My own interest, like Aurora (and others such as Joe Turner, Tendayi Achiume, Arshad Isakjee, Thom Davies, and Gurminder Bhambra), is in how colonial histories, as well as contemporary colonialisms, continue to influence the present. One aspect of this is seriously contemplating how ideas around race, and ongoing racisms, help to shape migration and people’s experience of it. It is surprising to me that migration studies seems to have neglected these issues but things do seem to be changing -there are an increasing number of events and publications on migration and colonialism and that is brilliant. Whether any of these discussions then have any impact on the imaginaries and understandings of policymakers is then of course another matter.

What do you hope readers will take from your book?

Anything that is useful for their own research!

When can we get our hands on a copy of your new book?

The book is out now in hardback and ebook, and will be out in paperback in 2021.

Look out for my forthcoming book (later in 2020 with Polity) ‘Migration Studies and Colonialism’ with Joe Turner, which deals much more with some of the broader questions about migration research, history, and colonialism, that you have asked in this interview. 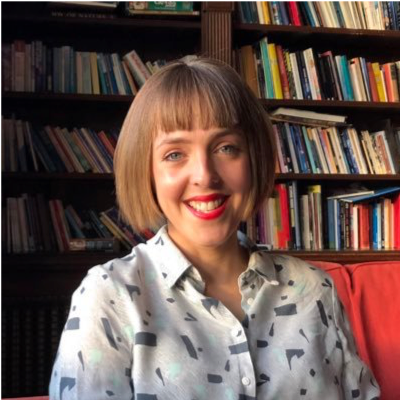 Dr Lucy Mayblin is a Senior Lecturer in Sociology in the Department of Sociological Studies at the University of Sheffield. You can find out more about her work here https://www.sheffield.ac.uk/socstudies/staff/staff-profiles/lucy-mayblin 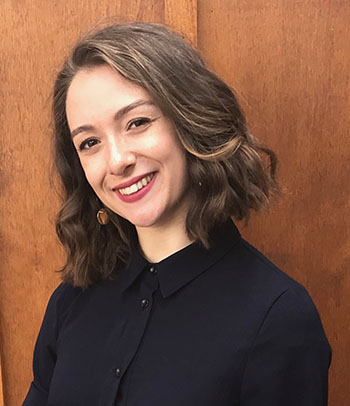 Natalie C Bennett is a PhD candidate in Social Epidemiology and Public Health at the University of Sheffield. Her research focuses on ethnic density, social cohesion policy and mental health.

Family Reunification as a Right or a Strategy to Limit Migration?

I found out about the IMISCOE PhD Network during the 15th annual IMISCOE conference in Barcelona. It wasn’t really clear to me what it was about.

This month we had the pleasure of talking to Dr Lucy Mayblin, Senior Lecturer in Sociology at the University of Sheffield about her new book ‘Impoverishment and Asylum: Social Policy as Slow Violence’ and the importance of history in contemporary...

Everyone Protested in the 2010s – and so Did Migrants

It is hard to avoid the temptation of writing a balance of the previous decade when you are given the opportunity of being the author of the first blog post of 2020, and I will indeed not be able to escape it.