Today we sit down with Professor Marlou Schrover, from Leiden University where she is full time professor in Economic and Social History with a special interest in migration history. 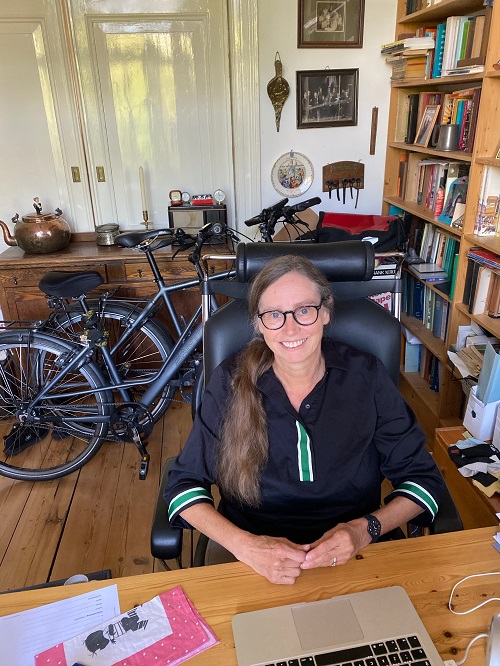 Schrover graduated in journalism in 1979 and in economic and social history in 1986 (both in Utrecht). She received her PhD at Utrecht University in 1991 for her research on labour relations in the food industry. She continued to work at Utrecht University until 2001, when she moved to the ING (Instituut Nederlandse Geschiedenis) in The Hague. From January 2002 she also worked at the International Institute for Social History in Amsterdam.
Since March 2003 she works at Leiden University. She has published books and articles on migration, the food industry, entrepreneurship, demography, ethnicity and gender.

My first real contact was in 2006. We had organized a conference on illegal migration and wanted to publish part of the papers as an edited volume. We did so within the IMISCOE series (Marlou Schrover, Joanne van der Leun, Leo Lucassen & Chris Quispel (ed), Illegal migration and gender in a global and historical perspective (Amsterdam AUP 2008). Shortly after that I was asked to join the editorial board of the series, of which I was a member until 2016. I learned a lot from doing that task. I few years after I stepped down, I was asked to join the general board, representing Leiden University. Leiden University, with over 180 people doing migration research, is important to the field.

What made me join is the network that IMISCOE provided. At the various gatherings and via the website and mailing lists, you keep updated about migration research. The conferences are always inspiring and you return from them with new ideas and contacts.

The conferences and other gatherings have a positive and stimulating atmosphere. Debates are high level, and people who are on the board are very committed to their task. They are also willing to change: they are willing to explore new avenues of research and address new topics.

In the past few years I have worked on the interaction between claim makers (NGOs, the media) and policy changes. I have studied how, when and why policies changed. I have for instance looked at policies regarding intercountry adoption (which is a field seldom seen as part migration studies), and the policies regarding foreign homosexuals (right to citizenship, right to admission/family formation and right to refugee status). I will continue to work along these lines also in the future.

I liked the conference in Rotterdam. We had set up a corporation between Leiden, Delft and Erasmus Universities (the LDE Master Governance of Migration and Diversity). At the Rotterdam conference we included a large number of our students (also as support staff). I enjoyed seeing them become part of our academic community.

How has the pandemic affected your work and institutes and which ways have you used to cope with the new-normal when it comes to working routines?

The COVID pandemic has created interests in how previously authorities and others responded to pandemics. This applies to the AIDS pandemic of the 1980s (leading to severe restrictions for foreign homosexual men, trying to enter the US), or the 1921 typhoid epidemic, which led to worldwide restrictions on travel, and intensified controls.
At a more personnel level, the main aspect of the pandemic is fewer student-staff interaction on campus (but not overall), and fewer conferences on site. Although we can still attend on line conferences (and thus learn about each-others work, we lost the more casual interaction which led to interactions with people you did not know before (and thus new insights and new contacts).

The last months have also showcased the rise of anti-discrimination movements, re-ignited by the latest events taking place in the US. What started there developed into a wider global protest against social inequality, injustice and institutional racism. How do you see this situation developing within migration studies?

It has led to renewed interest in the roots of racism. We can only understand current discrimination, if we know how it developed over time. The roots are different per continent/country, as comparative research shows. Furthermore, the awareness grew that how societies deals with one category of power and identity – such as ethnicity – is related to other categories, such as class, gender, sexuality, religion and ability. This is a positive development in migration research.

Fifteen years in, and being someone who’s deeply engaged with this environment, where do you hope to see IMISCOE go in the next fifteen years?"

When I joined, I hoped that the interest in historical developments (and thus the roots of current policies, policy changes) would become stronger among IMISCOE members. IMISCOE is interdisciplinary but the historical discipline is still rather underdeveloped. I hope to strengthen that.

Welcome to the IMISCOE Bulletin third issue
As we look back at this first year of the IMISCOE Bulletin we are proud of this project thus far and we are...
Imiscoe Network Office
Goodbye IMISCOE
Dear colleagues and friends, After 6 years working for IMISCOE, I am now saying goodbye to this great...
Vitrine
A lot to show for this third and conclusive issue of 2020. This call yielded incredible success amongst our...
A chat with
Marlou Schrover
Today we sit down with Professor Marlou Schrover, from Leiden University where she is full time professor in...
Editorial
The European Pact on Migration and Asylum
Position statement written by Andrew Geddes
PhD Network
Virtual coffee with: a Postdoc: Giulia Mezzetti
“Learning from Covid-related disruptions”
Spotlight
Becoming a Minority (BaM)
Over the last forty years, researchers in the Field of Migration and Ethnic Studies looked at the...