go to the Migration Research Hub
The Voice of an Artist

Research around migration and the arts has abundantly demonstrated how music can help immigrants mobilize and raise awareness. Tammam Al-ramadan, is a 28-year old Syrian musician who fled Aleppo in 2014 and settled in Belgium. He is a Ney player who learned how music can create bridges and serve political engagement in a transnational context. He accepted to share his story with us for this special IMISCOE Bulletin. 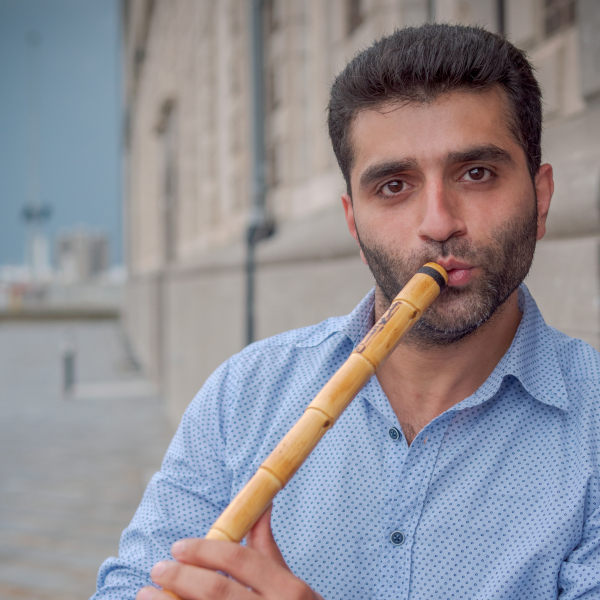 When did you arrive in Belgium, and under what circumstances?

I come from the city of Aleppo, a city destroyed by a civil war which burnt down everything for more than ten years.
I arrived in Belgium in early 2014 feeling that the war would never end. I decided to leave my country and became a migrant after living a few years in the middle of the war.

What artistic projects are you involved in? What do they consist of, and how is it possibly a way to engage socially/politically?

In my personal opinion, music is something that can cross borders and adapt to all conditions relatively quickly. I was a member of several projects after arriving in Belgium, like the Refugees for refugees project, music d'exil, music D'Alep, Syrians Got Talent, and many other projects. Obviously, when you work, in general, it helps you share more in daily life, discover more, and learn more.
Thanks to the projects I played in, I could discover plenty of places in Belgium, meet many people, discover their difficulties. I always say, "to find a good solution; you have to understand the problem completely".

Were you able to collaborate with musicians from other countries or musical styles? If so, what do you get out of it?

Being a musician here is not the same as in Syria. Here what I play and what I bring is called World Music. If I play the same thing in Syria, they call it classical Arabic music. So, I have met a lot of musicians who came from different musical styles and nationalities. I have seen instruments that I have never seen before. So, it was not easy at all to be in a situation like that, but it was very interesting for me to learn and, of course, to give to others.

What is the possible link between your refugee status and your status/identity as a musician?

Being a refugee and also a musician are two things that are very much intertwined. The most difficult challenge for me was, "Am I the refugee-musician or the musician who became a refugee?" It is a question of priorities … The link is strong because if we talk about the difficulties I experienced here, we can understand that the link between music and the musician status is something very sensitive. I went through phases where I thought I could stop everything, but thanks to music, I was able to continue. At the same time, I always come back to the same title. I am, above all, a musician; that is the definitive status.

What administrative, technical, or cultural hurdles have you faced, and how did you deal with them?

This is the critical point that I find everywhere. Every action has its advantages and disadvantages. If we talk about the general refugee pathway, here, especially, what I saw was that the pathway, of course, is not easy but very structured, which I find easier. However, for this reason, I have also had many problems because I have received proposals for projects since my first months in Belgium. So, I entered the labour market without having a good knowledge of contracts.
In addition, the catastrophic problem is that the possibility to travel has been very limited, as a Syrian. Most countries do not allow entry to Syrian passport holders. Also, getting a passport and renewing it is very expensive and time-consuming. When I was at the CPAS, the centre that helps refugees and people who have no income, it was difficult for them to understand that I am a professional musician. Every time, they would direct me to the path of normal people by offering me training in an accessible job so that I could earn a living. I was always resisting all of this and trying to get more work in the field that I like and found it myself.

Tammam Al-ramadan has been involved in numerous musical projects in Belgium. Some of his work is accessible on Youtube:

#5 - Oslo hybrid Annual Conference and the situation in Ukraine

Editorial
Russian war on Ukraine
What war and displacement in Ukraine mean for migration studies
Statement
IMISCOE Statement in Support of Ukraine and Scholars at Risk
IMISCOE (International Migration Research Network) wants to express its deep concern about lives in Ukraine.
A chat with
Ida Tolgensbakk & Justyna Bell
We sat with Ida Tolgensbakk and Justyna Bell to discuss the long-awaited 19th Annual conference that will...
In the spotlight
‘Introduction to Migration Studies’ is out now!
‘Introduction to Migration Studies’ has been published! This new volume does not only bring together work on...
The Voice of an Artist
Tammam Al-ramadan, Syrian Musician and Refugee
Research around migration and the arts has abundantly demonstrated how music can help immigrants mobilize...
Podcast
On understanding Social Complexity
To kickstart our new series of episodes, we invited Steven Vertovec to speak about ways of studying and...